Guided Architectural Tour of the Goethe-Institut 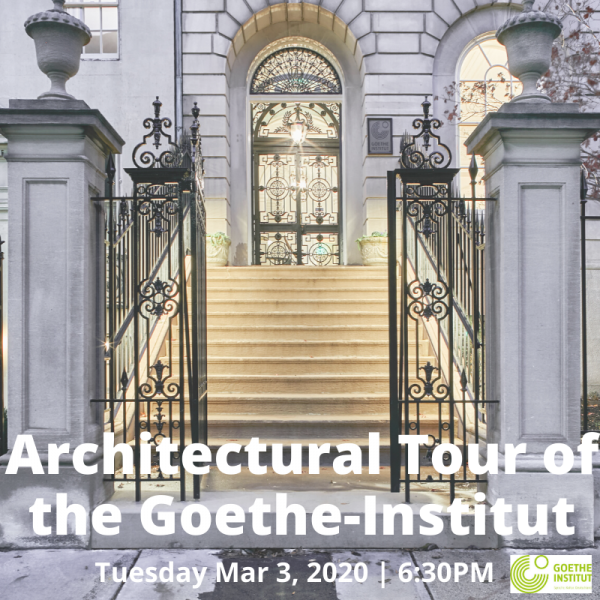 If you are a member, you should sign in to take advantage of member pricing, and your checkout details will be filled automatically.

Be one of the first to see the recently renovated Goethe-Institut in its new beautiful splendor: Our friends at the Institute are opening their doors to the GABC to an exclusive guided architectural tour of the newly renovated building!
For the past 2.5 years, the Goethe-Institut, which is housed in a beautiful Victorian-era city mansion on Beacon Street has been renovated and updated under the careful guidance of KARO Architects with an particular eye on preserving and restoring the historical and architectural details of the building.

KARO ARCHITECTS and the Director of the Goethe-Institut will be on hand to lead through the building to explain the fascinating history of the house by pointing out architectural surprises and historical elements from 1861 to 1900 (when the last major remodel took place) to 2020!

The Goethe-Institut Building on Beacon Street

The Goethe-Institut moved into the building on 170 Beacon Street in 1967, and by now is the longest resident in this extraordinary building with a thrilling history. Since it was first constructed in 1861, the house has changed ownership many times, and has also undergone many architectural changes. Today’s building owes its appearance to an expansion and remodeling which transformed the original Victorian city mansion into a neoclassicist building with a new façade in the Adam style. This new vision for the house was created in 1900 by Odgen Codman, who had made a name for himself at that time as the architect of the Boston high society. Now, over 50 years after the Goethe-Institut first moved into the building, it was of the utmost importance to KARO architects Anke Roggenbuck and Sebastian Kaempf that their vision for the renovated building was guided by the respect for Codman’s original architectural conception.

Time:
6:30PM to 8PM
Guided tour with a reception to follow.

Tickets:
GABC members: Free (pre-registration is required via this registration link)
Non-members: $20 (please register by paying through this site)

Registration is on a first-come-first-serve basis. There is a limited number of spaces available and early registration is recommended.