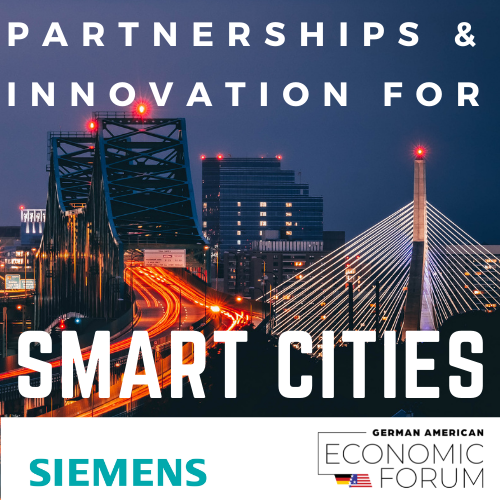 After seven online panel discussions introducing and creating awareness for the many technical solutions available to “smart” cities, we are concluding this successful series with the German American Economic Forum: Smart Cities 2021 focussing on the needed partnerships and innovative technologies  to develop and achieve the city of tomorrow.

Join our interactive live panel discussions to hear from industry, academic and municipal leaders in Germany and the U.S. as they discuss pathways and their visions for Smart Cities. Ask questions and join fellow participants for a virtual coffee break over Zoom to meet & mingle!

When registering, you will receive a confirmation link. Please check your Spamfilter in case you don’t see it right away. 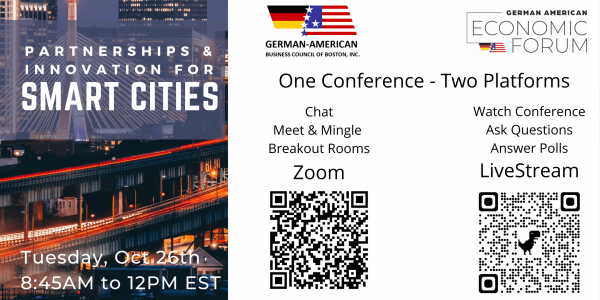 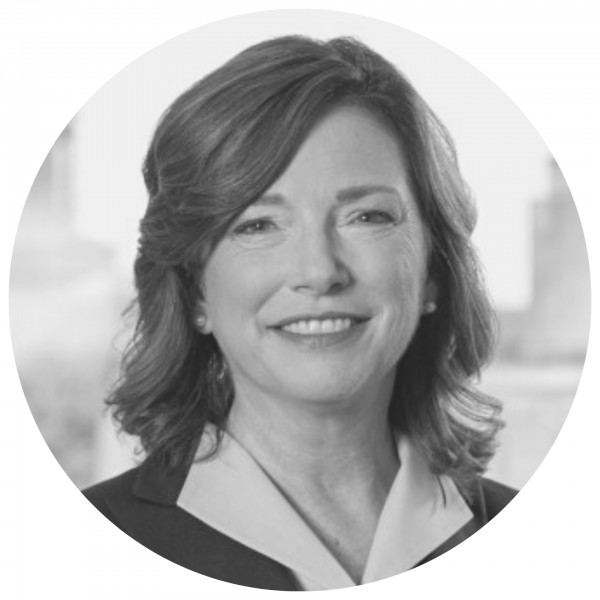 Barbara Humpton, President and CEO, Siemens USA
Barbara Humpton is President and CEO of Siemens Corporation, where she guides the company’s strategy and engagement in serving the company’s largest market. Siemens USA employs approximately 40,000 people serving customers in all 50 states and Puerto Rico and generated $17 billion in revenue in fiscal year 2020. She views the true purpose of technology as expanding what’s humanly possible. She’s also passionate about diversity, STEM education and what she calls a worklife blend that honors her priorities both at Siemens and as a grandmother. Most recently, Humpton served as president and CEO of Siemens Government Technologies, Inc. (SGT), a leading integrator of Siemens’ products and services for federal government agencies and departments. In this role, Humpton also served as an officer/director member of the board of directors of SGT. Prior to joining Siemens in 2011, Humpton served as a vice president at Booz Allen Hamilton where she was responsible for program performance and new business development for technology consulting in the Department of Justice and Department of Homeland Security. Earlier, Humpton was a vice president at Lockheed Martin Corporation with responsibility for Biometrics Programs, Border and Transportation Security and Critical Infrastructure Protection, including such critical programs as the FBI’s Next Generation Identification and the TSA’s Transportation Workers’ Identification Credential. Humpton is a graduate of Wake Forest University with a bachelor’s degree in mathematics. Barbara is Chairman of the Siemens Corporation Board, the Siemens Foundation and of the Center for Strategic and Budgetary Assessments (CSBA). She serves on the board of directors of the American Heart Association Greater Washington Region, Triumph Group, National Association of Manufacturers (NAM), Chief Executives for Corporate Purpose (CECP), Economic Club of Washington, D.C. and the Seabee Memorial Scholarship Association. She resides in Washington, D.C., with her husband David. 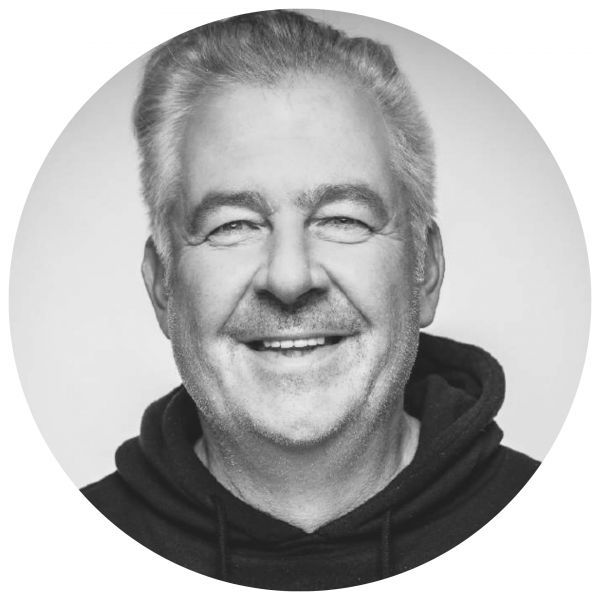 Frank Barz, Partner Manager at Telekom Deutschland GmbH
Frank is a technology pioneer, future strategist and consultant for digital transformation across disciplines. He is currently Partnermanager at Telekom Deutschland GmbH. In his role, he leads the Techboost Startup Programm which matches some 650 start-up companies with business partners of Deutschen Telekom. Tapping into his pioneering spirit and partnering with start-up companies for novel technologies, he develops and implements a wide range of innovative digital solutions for customers, providing support all along the change process. Prior to this role, he worked as digital consultant for T-Systems, responsible for the areas energy, e-mobility and smart city. 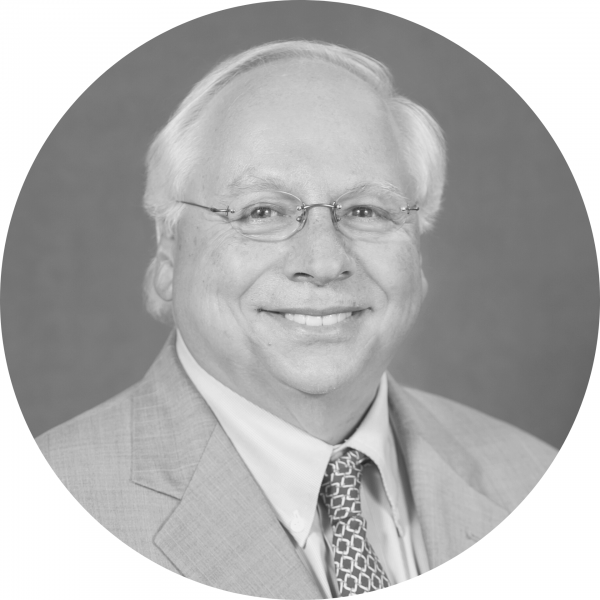 Rick Dimino, President and CEO of A Better City
Richard A. Dimino has served as the President and CEO of A Better City since 1995. Under his leadership, A Better City has achieved major organizational accomplishments and influenced a wide range of city and regional infrastructure projects. He significantly impacted the planning, design, and development of a twenty-seven-acre corridor along Boston’s waterfront, and through his advocacy of Massachusetts’ Transportation Reform Legislation, the new Massachusetts Department of Transportation was formed. Within the organization, Mr. Dimino successfully launched the Sustainability and Climate Change Initiative and received numerous awards, including the Move Massachusetts Construction Achievement Award, the Boston Harbor Islands Governor’s Award, and the Environmental Business Council of New England’s Environmental-Energy Merit Award. Prior to leading A Better City, Mr. Dimino served the City of Boston as Commissioner of Transportation from 1985-1993, where he oversaw a staff of 400, represented the City on MBTA advisory boards and committees, and developed all related infrastructure projects and policies. Mr. Dimino then held a position as Vice President and Deputy Manager of Stone & Webster Engineering Corporation’s Transportation Business Sector. He has also advised transportation projects in St. Louis, New York City, Belfast, and New South Wales. Throughout his career and tenure as Commissioner, Mr. Dimino published a number of articles detailing the city’s transportation network, including A Successful Traffic Relief Program for the Institute of Transportation Engineers Journal and Transportation for Boston: A Framework for Improved Access. He has lectured on transportation and project management at Harvard University and Boston University, and his accomplishments earned him the 1988 Engineer of the Year Award from the New England Chapter of the Institute of Transportation Engineers. Mr. Dimino received his Master’s in Business Administration from Boston University in 1994 and is a 1978 Magna Cum Laude graduate of Northeastern University. In 1991, he completed a Loeb Fellowship in urban policy and transportation planning at Harvard University’s Graduate School of Design. Mr. Dimino currently serves as a Board Member of the Boston Society of Architects and Foundation, President Emeritus of the Metropolitan Area Planning Council, Executive Committee Member of the Freedom Trail Foundation, Chair Person of the Mayor’s Northern Avenue Bridge Advisory Task Force Committee, and Board Member and Facilities Committee Chairman of the Boston Children’s Museum

Michael has served as Special Assistant for White House Operations to two Presidents, policy research analyst to the former Prime Minister of Ireland, and Director of Development for United Way of Massachusetts Bay and Merrimack Valley. 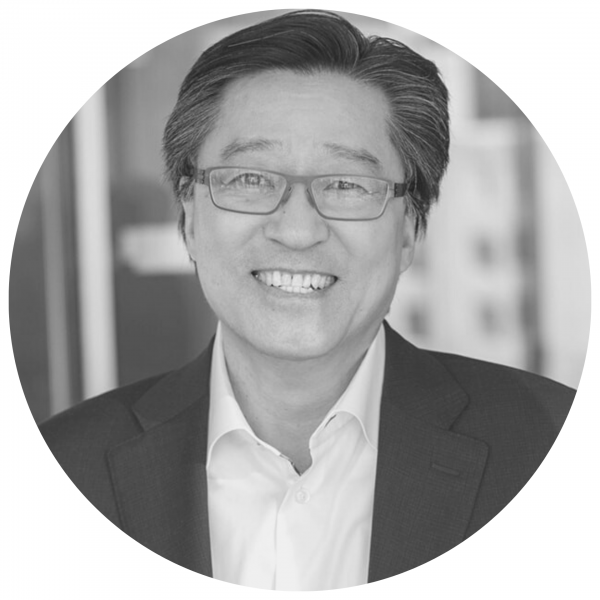 Young K. Park, President of Berkeley Investments Inc
Young Park sets strategic priorities for the firm and directs investment production, investor relations and development activities. He is a board member and former president of the Massachusetts Chapter of National Association of Industrial and Office Properties (NAIOP) and a member of various non-profit boards, including The Rose Kennedy Greenway Conservancy; A Better City (ABC); the School of Social Science, Urban Affairs and Public Policy of Northeastern University; and the Boston Harbor Association. Young is a graduate of MIT (BS Urban Studies) and Harvard University (MArch UD). 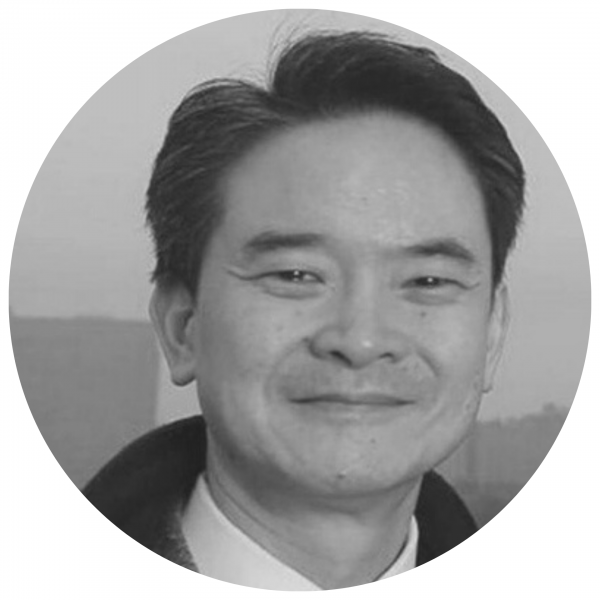 Kairos Shen, Executive Director, MIT Center for Real Estate, Associate Professor of the Practice
Prior to his academic appointment at MIT, Mr. Shen was the Director of Planning at the Boston Redevelopment Authority, Boston’s Economic Development and Planning Agency for thirteen years. In his capacity as Boston’s Chief City Planner, Mr. Shen worked closely with the Mayor of Boston to envision, coordinate and administer the city’s planning and economic development policies and regulations. He was intimately involved in many of Boston’s most important planning and economic development initiatives for over two decades from 1993 to 2015. They include the development guidelines for the Rose Kennedy Greenway, the planning and implementation of the South Boston Waterfront Innovation District, the refurbishment of Fenway Park, and the revitalization of Nubian Square. Throughout his professional and academic career, Mr. Shen has been a staunch advocate for design quality, diversity and livability in cities. Mr. Shen is a graduate of Swarthmore College and has a Master of Architecture from MIT. 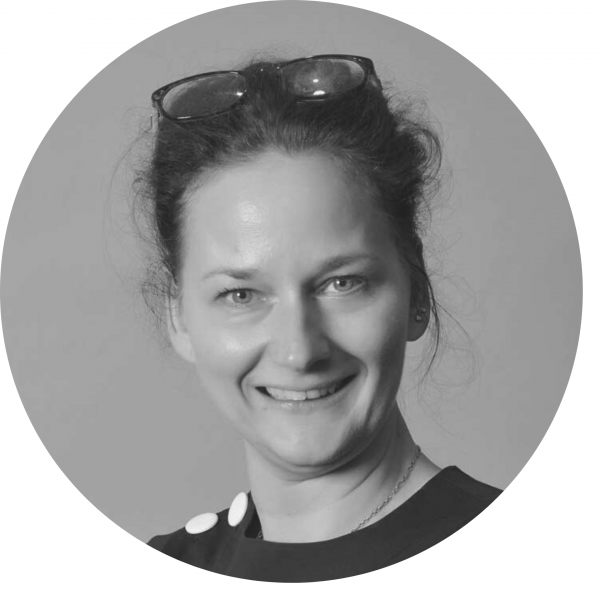 Annette Wiedenbach, GABC SmartCities Task Force
Annette Wiedenbach is Country Manager China at Climate Scorecard and a 2018/19 Fellow of the Special Program for Urban and Regional Studies at the Department of Urban Studies and Planning at MIT. As an international corporate communications and public affairs professional she worked over 20 years in global and local government affairs, communications, change management and sustainability leadership positions for German companies operating globally. She has lived and worked in Germany, China, Taiwan, Singapore and is currently based in Boston, MA, USA. Until 2018 she was a member on the steering committee of the Covestro-Tongji Chair for Sustainable Development at Shanghai’s Tongji University and Co-Chair of the Sustainability Task Force of the China Petrochemical and Chemicals Industry Federation. Annette is Content Lead for the GABC SmartCities Task Force conceptualizing and driving content for the German-American Forum event series and Forum. 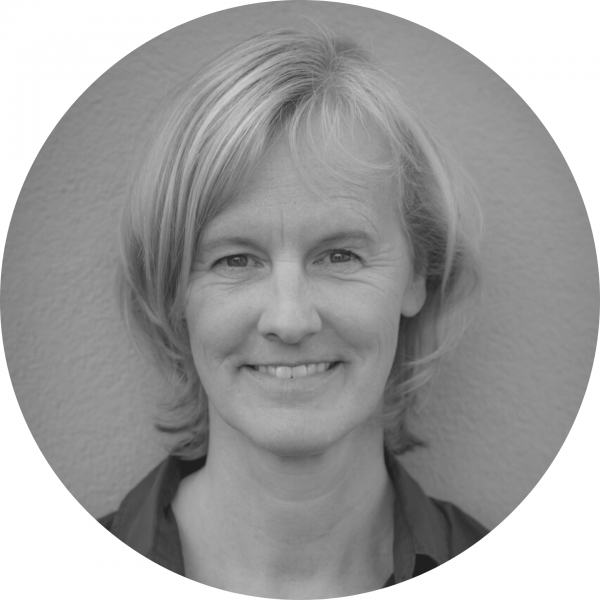 Prof. Dr. Gesa Ziemer, HafenCity University, Hamburg
Gesa Ziemer (Prof. Dr. Phil.) is director of the City Science Lab, a collaboration with the MIT Media Lab in Cambridge/USA and academic lead of the technology and innovation lab UNITAC for the United Nations. She is professor of Cultural Theory at the HafenCity University Hamburg. Her research is focused on Digital City Science, new forms of collaboration and public spaces. She received the Humbold Foundation grant for the Feodor-Lynen Program at the Harvard Kennedy School, Cambridge/USA and is member of the Scientific Council of Germany.

Special thanks to MilliporeSigma for providing the technology and support to host this event.

The German American Economic Forum (GAEF)  is the GABC’s annual flagship event bringing together different stakeholders over one focus topic. GAEF takes up current economic affairs and future topics from different industries to provide a networking, learning and discussion opportunity for stakeholders from the private sector, academia, government and civil society. GAEF draws on the strong German-American business community to showcase innovative solutions from Germany industry and American businesses with German ties. The focus of GAEF 2019 held at Northeastern University was Healthcare.